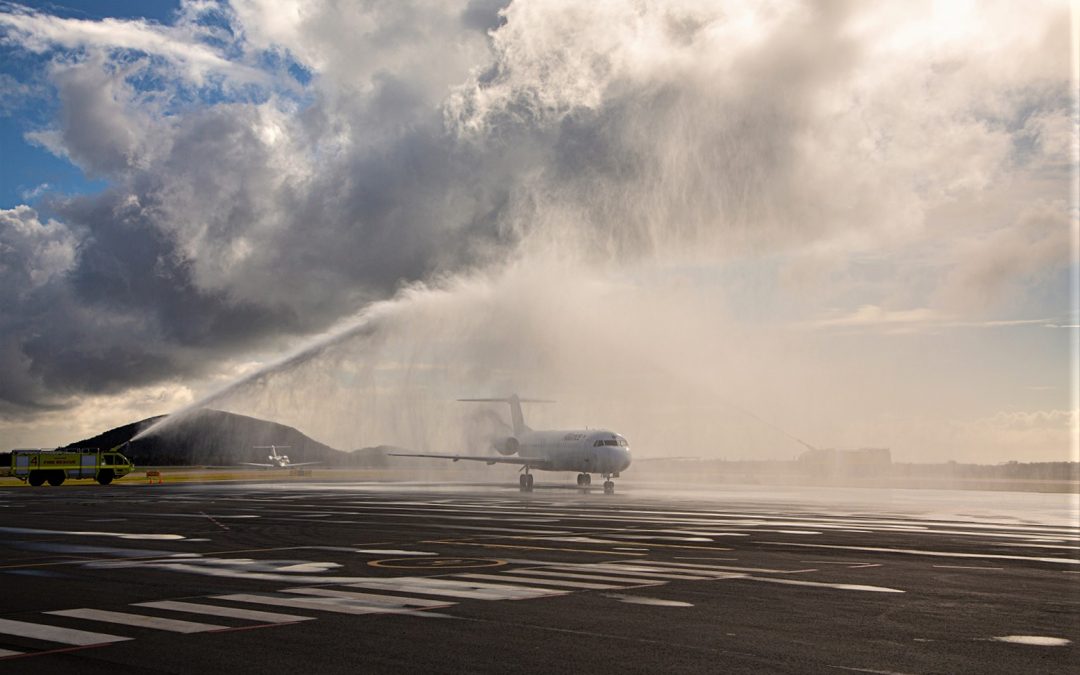 Sunshine Coast Airport has welcomed the arrival of the first flight on its new $334 million runway as it officially opened on Sunday 14 June, 2020.

An Alliance Airlines Fokker 100, flight QQ 1331, was the first aircraft to touchdown on the new 2450m x 45m runway at 9:30am, 11 weeks since the airport closed its terminal and temporarily farewelled its last passenger jet.

Sunshine Coast Airport Chief Executive Officer Andrew Brodie said the completion of the new longer and wider runway came at a critical time and would open the region to more destinations and greater export opportunities for local producers.

“The effects of COVID-19 have crippled our industry and the broader regional economy, but this new runway paves the way towards brighter new horizons which I know will come soon,” Mr Brodie said.

“It will enable us to welcome wide-bodied aircraft, allowing us to fill bigger planes with more people and access more domestic and, in time, international destinations direct from our doorstep.”

Mr Brodie said the new internationally capable runway would be an enduring legacy for the Sunshine Coast, providing the platform for future growth.

“This new runway is not just for today, or even tomorrow, it will open up opportunities never possible from the region and return dividends for our region for generations to come,” he said

“It also signifies the start of many new beginnings, as in the next two decades, we’ll invest $200 million into this airport through the delivery of new infrastructure, like redeveloping our terminal, establishing a dedicated freight facility and developing our Gateway precinct.”

Sunshine Coast Council Mayor Mark Jamieson said witnessing the arrival of the first aircraft on the new runway at the Sunshine Coast Airport was a both an historic event and a special moment as the vision and plans of Council became a reality.

“Seeing this aircraft touch down really demonstrated how far we have come in the last eight years and gave us a glimpse of the exciting future that the Sunshine Coast Airport Expansion Project will deliver for our region and our community,” Mayor Jamieson said.

Mayor Jamieson said Council’s largest ever infrastructure project was first mooted more than 40 years ago as part of the region’s planning documents, and had been advanced substantially since 2012, as part of a suite of region-shaping projects in the Sunshine Coast Regional Economic Development Strategy 2013-2033.

“A project of this magnitude is a once-in-a-lifetime occurrence and will be a notable highlight in the history of our Sunshine Coast,” Mayor Jamieson said.

“I have every confidence that today’s event is just the start of some exciting new opportunities ahead for the Sunshine Coast Airport and our community.”